I met a light on my path 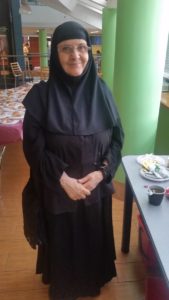 Blessed be the Lord who made it possible for me to meet this light on the path of my life.

Blessed be the day when I did meet Metropolitan Anthony of Sourosz, who was to be a loving and never fading light on my path.

It was in 1975, two years after I’ve arrived in England as an emigrant.  It was on a Sunday evening at the begining of Great Lent and it happened on the occasion of a panorthodox Vespers, when Orthodox Christians belonging to various jurisdictions of the Orthodox Diaspora in Great Britain,  were coming to pray together at the Russian Cathedral in London.

The moment I came into the church, I felt the impact of the spirit of prayer and of the warm and prayerfull presence of Vladika Anthony, who was celebrating Vespers on that evening.

I was coming from outside and I was still under the impression of the world of the big city, the great desert, a world still very foreign to me. But once I’ve stepped in, I felt I am at home, in the house of the Father. From then on I did not stop thanking God for having led my steps towards that blessed shore of His.

At this at home I’ve met Vladika Anthony, who was going to guide my steps towards the light, and to the freedom of the children of God.

He was a man of striking simplicity, who knew to make you feel loved, totally assumed and never judged. But the important thing was that he was praying for you, praying with you, and with him, you could learn how to pray in spirit and in truth. One could even say that he himself was a true school of prayer.

During difficult times, at times of trials, maybe at moments of disconcert, he knew to be close to you, to give you peace and a word  of consolation, guiding your steps with great care and fatherly love.

I remember how unhappy I was after my mother’s death as I could not be in time in order to be with her before her departure of this life. When I confessed to Vladika my distress concerning not being able to be by my mother when she needed me most, he shared with me of his own personal experience of the time when he was taking care of  his mother who was ill.

He told me that during the time that he was taking care of his mother, having to go away for a short while, in order to celebrate one of the Lenten offices during Great Lent, he left his mother on her own, but when he came back to her, she was already gone, departed this life.

From his sharing with me of what he himself lived at the difficult time of his mother’s  death, I have learned something that was a great consolation, and helped me to overcome the difficulty of the that period.

He told me that those who loved each other while on earth, are united in love for eternity, for in love, there is no past tense.

Those who have loved each other on earth will meet again in eternity, where the beloved one, prepared a place for them. And if we wish that our beloved departed, find their peace there where they are now, we must also find ourselves this peace here on earth , the peace that Christ Himself has given to us.

Now I would like to speak of a few things that impressed me very deeply concerning Vladika Anthony: It was his attitude to life, to death, the way he was living his life, as a monk in the midst of the city of man, having to face difficult situations, or bringing joy and hope where there was no hope.

Confession was a special event in our life, a moment of truth, of courage and of humility, when one had to face oneself as one was.

It was to open wide the doors of one’s soul in order to let the light get into one’s inner being. And thus be able to see the dark corners of one’s soul. It was a way of  knowing the truth of oneself and repent. It was the beginning of a journey back home in order to ask forgiveness from the Father, as did the prodigal son.

Coming to confession on Saturday evening, meant being prepared to wait, as there were quite few people waiting for their turn to make their confession. Being aware of our impatience, he suggested that we should spend this time in deep silence while  waiting for our turn, praying for the person ahead of us, who during that very moment, maybe is pouring one’s soul and one’s whole life in  deep repentance before God.

Confession was indeed a regenerating and a life saving experience.

I remember the way he was listening to one’s confession, when one was opening up one’s soul to pour out one’s mizery in repentance before God. His silent presence, his warm, attentive, loving listening, his non judjemental attitude and finaly his inspired answer was like a major healing intervention. One would go away feeling resurrected and healed in one’s most inner being.

Each suggestion and each advice he was giving us, was a treasure of wisdom, a teaching experience that one had to ponder upon and make it grow into one’s own life.

I believe it was born out of his deeply lived encounter with his beloved Lord who by His Holly spirit was continually inspiring him.

Because of this, when he was delivering a sermon, one knew that it was coming from his personal spiritual living experience, and that is why one believed and trusted everything coming from him.

But there were always various things going on whithin the life of the parish, which he was able to take notice of and which he liked to use in his sermons. For example, the day when a certain lady complained that children were making to much noise in the church, he gave  a sermon saying: Wasn’t the Lord saying to His Apostles ‚Let the children come to me’? And otherwise if someone would have been able to record all the thoughts going on in our busy mind during the services, and transmit them through the loudspeakers, would it not create indeed an incredible noise filling the church?

On another occasion during Lent, on Good Friday, while bringing the Shroud in a procession from the altar to the middle of the church, a baby started crying so loudly that one could not listen to the service and nothing could stop him. Somebody went to the mother of this baby  asking her to take the baby out of the church, but she could not do it. As a result, the baby continued to cry his heart out and nothing could make him stop.

At the end of the service, Vladika Anthony gave a sermon saying: “Christ has been crucified, today we have been taking Him to his grave. The whole universe is crying and the whole created world is lamenting through the voice of this little baby and we couldn’t tolerate it”.

Speaking of his generosity and his lack of possesiveness, I remember he never posessed a personal car to take him around, he did not have a secretary and he used an old typing mashine in order to type his letters as answers to his spiritual children. I would like to ilustrate this with a little story.

I once was given to read a book that was already circulating in the parish since two years. Initially it was Vladika who has lent it to one of the parishioners who continued to lend it to other members of the parish during all this time. But Vladika never asked for it back. I am sure he was glad if it was usefull to someone, and he didn’t really care if the book was returning back or not.

People were bringing him presents or bags with food that were left in the cathedral. He never kept anything for himself, giving them away to other people who needed more.

When he used to live in the parish house he used to receive people of the street, the ‘down and outs’, in order to feed them, put them up to rest for the night as well as offering them a word of cosolation and of hope. Very often this was done at the expense of  having no place to lye down himself for that night.

There were times when he would give an appointment to see someone. He was allowing roughly about an hour and a half for each person. During this time the feeling one had, was that one was the only person in the whole world that counted for him, and to whom he was giving all his loving attention.

The regular talks given at the cathedral, were always times of reopenings the eyes of our understanding, and of our hearts, in order to receive a word of truths, of wisdom and receive God’s mercy and the Holly Spirit working its wonders in our life.

I remember one time at the beggining of a talk, one could feel he was very tired, empty of any energy. But one could see how gradually he was becoming more and more alive, as the talk was going on, while the Holly Spirit was filling his heart, giving him more and more strength and inspiration.

I cannot describe how was a liturgy celebrated by Vladika Athony of Sourosz of blessed memory, as it is very difficult for such  a living experience to be expressed in words. I can only say that during the holly liturgy, one’s heart was lifted up in such a way that one could forget indeed of all the cares of this world, while being filled with the joy of the resurrection

Vladika Anthony was for us ”the good shepherd giving his life for his sheep”. He took us on his shoulders and he carried us with love in his enlarged heart, guiding our steps with great care and fatherly love towards the shore of peace and to the freedom of the children of God

We may thank the Lord for the blessing and great joy of having met him who has offered himself to us as a living sacrifice, and has blessed us in so many ways.

May he be blessed, and may he rest in peace with the saints.

Thinking of  what he meant to us, and remembering his precious advice concerning us in relation to the beloved departed ones, now that he is nomore with us here, I would like to quote his words suggesting that from now on, we may live in such a way as to prove that he has not lived in vain. In other words, may all his loving sacrifices and the many seeds that he has left in our hearts, bear fruits. May God help us to do so

With gratitude and prayers, to our beloved Father, Vladika Anthony, whom we’l never forget, knowing that he is and will always be with us.