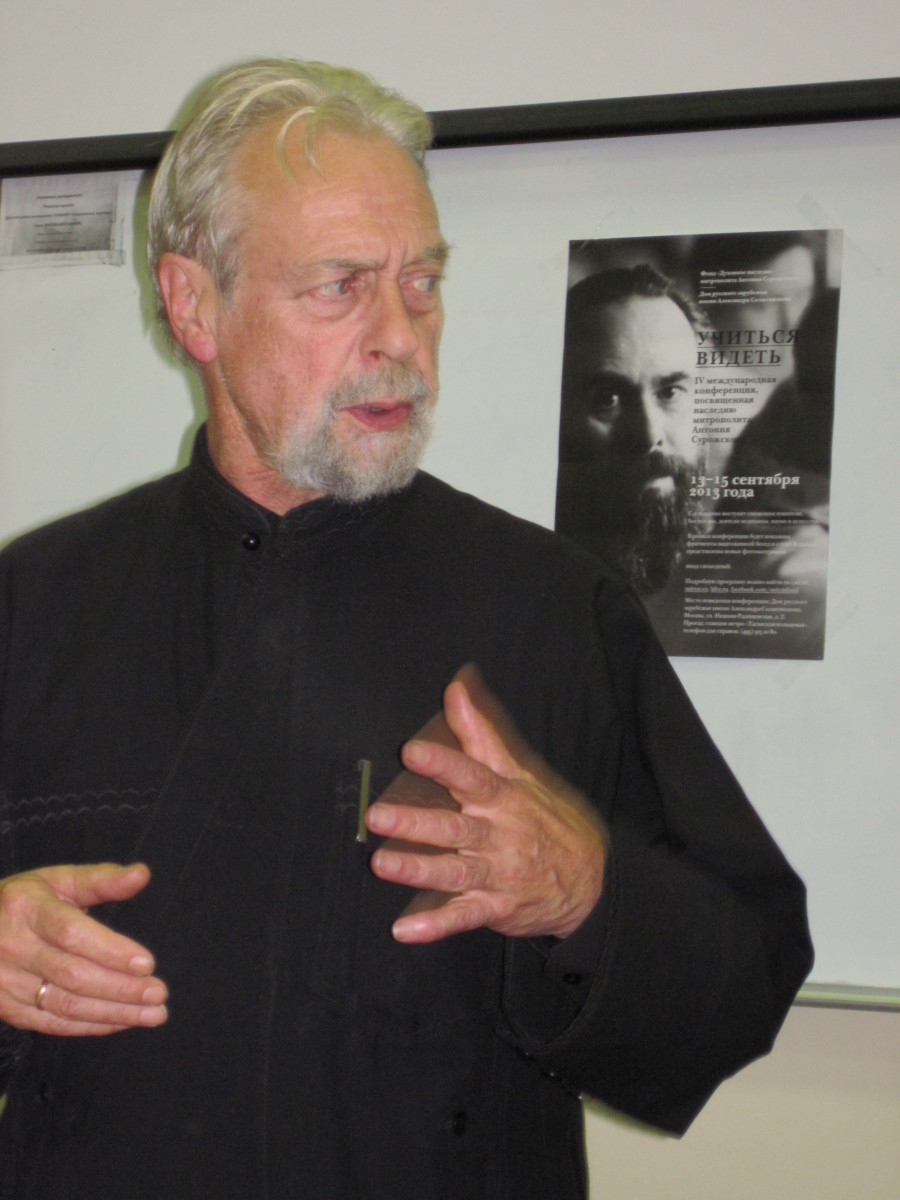 It was with very great sadness that we learnt of our beloved Father Peter’s death on 11th September.

Until his ordination to the priesthood on 1st February this year he was simply Peter – or Petya, to his Russian friends – one of the long-standing members of our Deanery and before that of the Diocese of Sourozh, and as his name implies a rock for our Church family. 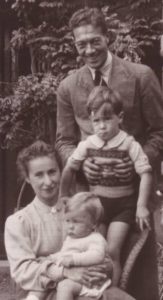 Peter Frank Scorer was born during World War II in Thaxted, Essex at the Priory, where his family were living as evacuees, and was baptised there by Fr Lev Gillet.  He took his middle name from the surname of his eminent grandfather, the religious philosopher Symeon Frank.

The Franks had left Russia in the early 1920s, and after living in Germany and then France, where Peter’s parents were married in the rue Daru Cathedral, they came to England.  Sadly, Peter’s English father, Paul Scorer, was killed on active service in August 1943.  After the War Peter, his mother Natasha, brother Michael and maternal grandparents Tatiana and Symeon settled in Golders Green, which remained the family home for 60 years until Natasha’s death in 1999.  They were members of the Dormition parish in London, and Peter was one of the first group of children there to attend the Orthodox summer camps in France.  When a camp was set up in North Wales he, together with Jane Collingridge, Tamara Dragadze, Xenia Bowlby and the Behr brothers formed the nucleus of what was eventually to become a legendary institution. 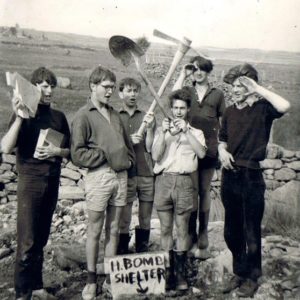 After Arnold House prep school, Peter went as a day boy to Westminster School and then in 1961 to New College Oxford where he read Russian and French.  He then studied at St Vladimir’s Seminary, New York, USA from 1964 to 1967 under Fathers Alexander Schmemann and  John Meyendorff.

On 1st September 1967 in New York City he married Irina (née Hoecke) – the beginning of a blessed union that was to last for 53 years. The couple returned to England, where they raised their children Thomas and Ksenia, twins born in 1968, and Philip born in 1970, in Exeter, Devon, where Peter took up a lectureship in  the Russian Department at the university.  He worked there for over 30 years, becoming head of the Russian Department. 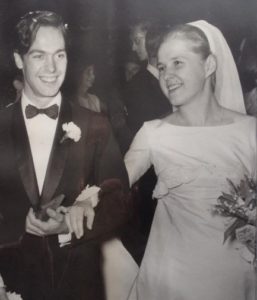 There was a small Orthodox community in Devon; and on 21st October 1973 at the London Cathedral, Metropolitan Anthony ordained Peter deacon to serve the nascent parish of the Holy Prophet Elias with Father John Marks.  The parish from the beginning welcomed people of all nationalities and backgrounds and has continued to thrive.  Peter was elevated to protodeacon on 13th June 1982, and remained a deacon until this year, when he was ordained priest by Archbishop Nikitas of Thyateira at St Anne’s church in Exeter.

From 1979 up to 2017 Peter took part in running the Sourozh, then Vicariate camps, where his organisational skills coupled with his great sense of humour and kindness made him a firm favourite with the children.  He understood the need for Orthodox children scattered across the country to come together and to worship, learn and live as a Church community.  Camp was to become a place where lifelong friendships, and not a few marriages, were made. 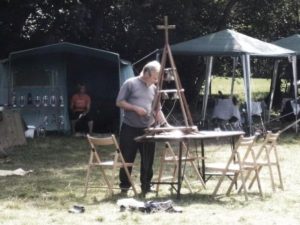 Peter was well-known throughout the Diocese/Deanery.  As a deacon he attended Assembly meetings, and he was a key participant in our Annual Conference, where  he not only gently guided new deacons in their    role, but also compered the party – and sometimes as the evening progressed, led some animated Russian singing.  Throughout the vicissitudes of the last few years he remained a stalwart presence, an inspiration and a continuity amid upheaval. 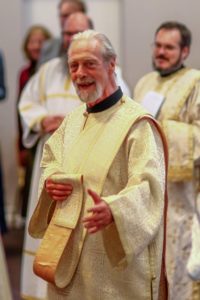 A highlight in Peter’s life was a visit to Uganda in 2012 with Martin Olsson, in connection with the Orthodox Parish there, with which the Devon Parish has been ‘twinned’ for many years.  In just a short time Peter endeared himself to the Ugandan people he met, as he did everywhere.  The Devon parish continues actively to support the Ugandan parish, in particular arranging sponsorship for some of its young people to attend university.

In 1991 the St. Gregory’s Foundation was formed, a charity for giving aid to former Soviet Union countries and Peter became an active member – he was for some time its Chairman.

In 1988 with Father John Marks he led the Diocese of Sourozh’ pilgrimage to the Russian Church (he had been on a similar pilgrimage in 1960, then led by Deacon Sergei Hackel).  Whether the churches visited were in use or just shells, Peter boldly led the singing of hymns and prayers, sometimes to the amazement of the babushkas in charge.  He also sang before meals in the hotels – the other guests were astonished.  In the southern city of Rostov-on-Don at a banquet following the Liturgy, Peter was asked to speak.   He memorably said, regarding the Church’s position at that time, ‘Strike while the iron is Gorbachov’ (a pun on the Russian word for ‘hot’). This was typical of his willingness to speak out, in a charming and amusing way, where others may have been hesitant. 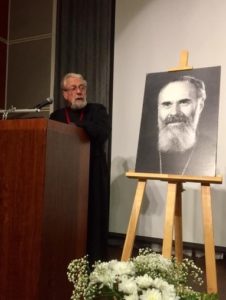 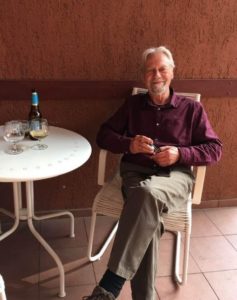 Since 1988 he visited Russia many times.  Notably in 1989 he and Irina accompanied Metropolitan Anthony as clergy and lay persons to a Sobor in Moscow.

He also had many friends, such as the Struve family, in France and other places. Wherever he had been, he left a ray of light.  His big personality, and the twinkle in his eyes, were not easily forgotten.

Latterly Father Peter had been helping with information on his grandfather Symeon Frank, whose works are now attracting great attention in Russia; a series of his complete works is currently being prepared.

But there was something else that Father Peter did during his last months.  Following his ordination to the priesthood and the country’s subsequent lockdown and closure of churches, Father Peter, together with Irina as his choir, began streaming online services: Vespers on Wednesday and Saturday evenings, and the Liturgy on Sunday mornings, including all of the Holy Week, Easter and Pentecost services. He celebrated the Liturgy for the last time on July 26th, on day of his twins’ birthday. 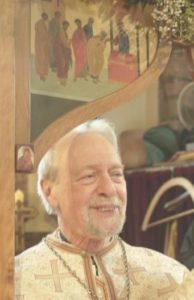 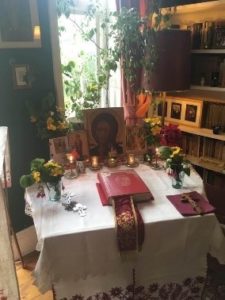 These services involved not only celebrating but sorting the technology and, for a man whose lungs were not in a good state, much singing – he joined Irina in the ‘choir’ when he could.  Father Peter valiantly continued giving a spiritual lifeline to so many people who were otherwise deprived of any church life, until his health gave out.    He spent his last days surrounded and cared for by family in the dining room where family and friends had gathered many times over the course of 20 years to eat together and celebrate numerous birthdays and feasts . 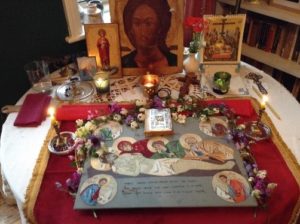 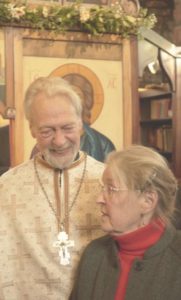 As a deacon for nearly 50 years, Peter’s vocation was one of service – to the church, to his parishioners, to his students, to his family, to all his friends.  He continued this into his short but crowning priesthood.  But he served us all with a wonderful sense of humour, with humanity, with kindness and a certain mischief; he was never ‘pious’.  Dignified in church, he was warm and funny in the world.  He was much liked and much loved.  A brief outline of his life cannot convey Father Peter’s warmth, nor the warmth we all felt for him. 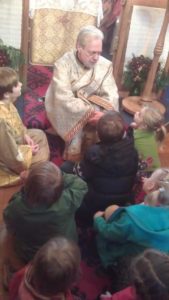 He was truly an inspiration and will remain close to us all in our hearts.

“Lord, this man  has not lived in vain. He has kindled in my heart a flame or a spark of love, he has brought love which is of God into my life. He has been a light. It may not have been a beacon of light. It may have been just a small candle but it brought light in my life. Look at the light he has brought and he has been. And this light lives in me now and this is the light which I bring to You as a testimony that he did not lived in vain… Yes, the seed has died, he is now in the grave, but the seed is also in my life, in my heart, in my memory, in my will, and I will try and bring fruit from his life so that one day when I also stand before the judgement seat of God, I can say, ‘Lord, all these things that You find beautiful in me, are not mine, they belong to him. Take them and give them to him because without him they would never have existed’”